The contents of this page are Product Identity, under the Open Game Licence.

Mytheye is a basic setting provided for GM's who don't want to write their own. The details provided are a bare minimum, to allow the GM greater freedom in their stories. 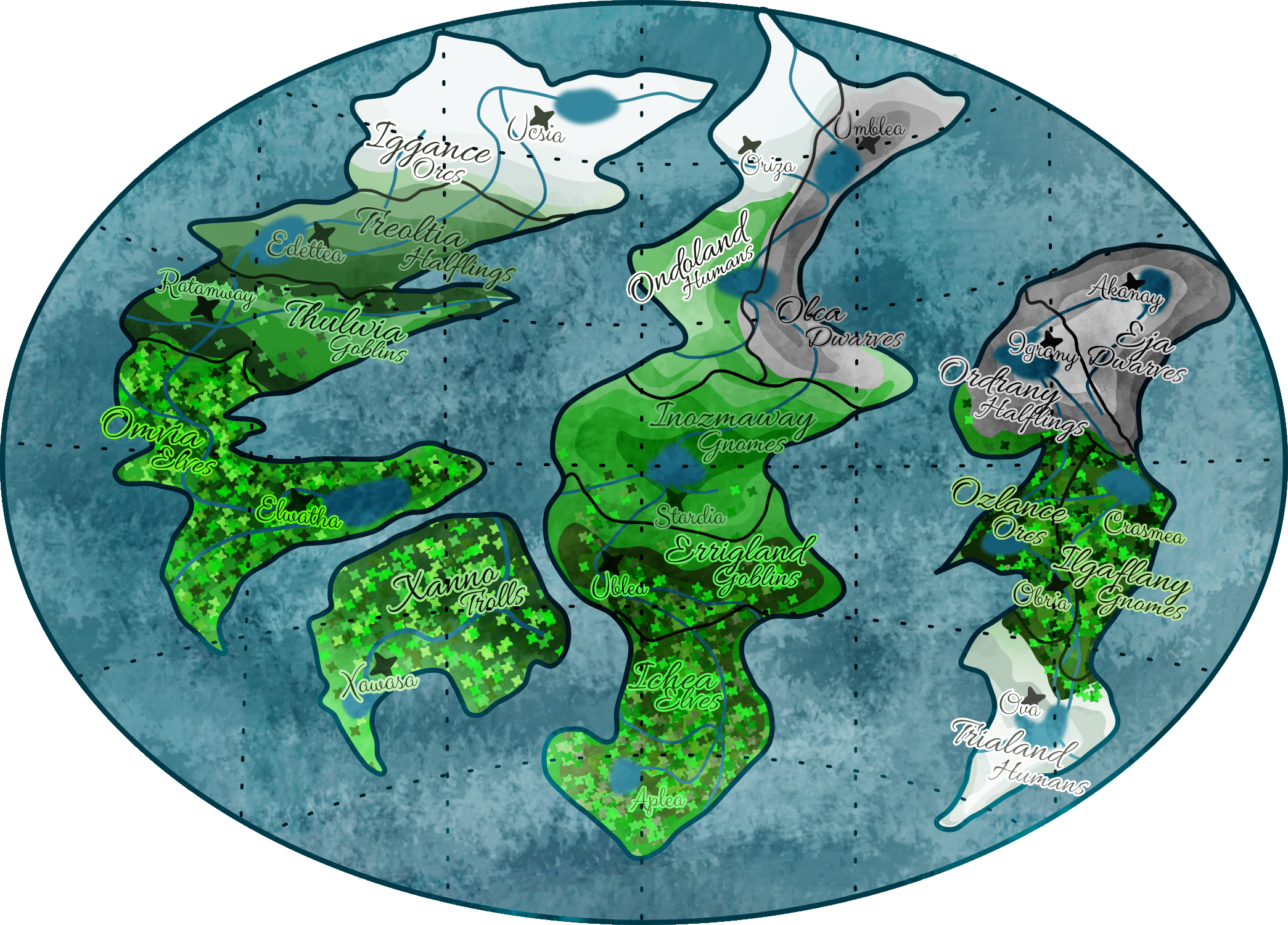 
The Darkness is a large tunnel network underneath southern Olca and Ondoland and northern Inozmaway. These tunnels are the homeland of the Kobolds. This underground kingdom is ruled by Queen Lelise (Neutral).


The moon of Mytheye (known as the Mirror) is, surprisingly enough, habitable. It has a thinner atmosphere (1d6 damage per hour of strenuous effort due to low oxygen, DC 10 Fort save negates) and lower gravity (+10 to Parkour checks made to jump), but it does have water and plant life. Some races have made small outposts on the Mirror; each of these outposts has a portal to Mytheye. 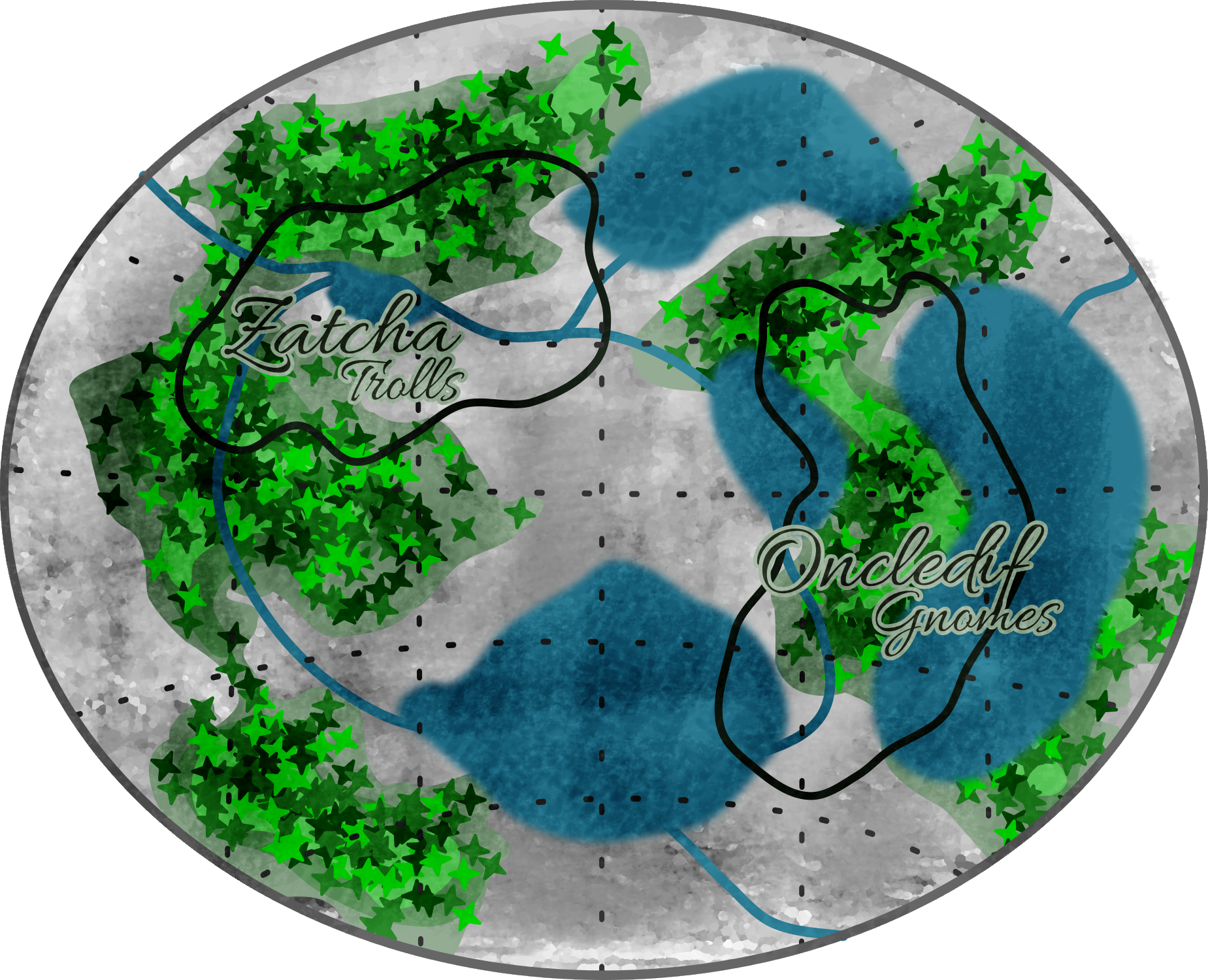 In Mytheye, there are no alignment planes. Instead, when a creature dies, its soul is sent to its afterlife plane (souls in a plane are known as "patrons"). Your afterlife plane is based on your actions in life. All afterlife planes are infinitely large; however, it takes almost no time to move from one place on a plane to another place on the same plane. Patrons do not need to eat, sleep, drink or breathe, but can do all these things if they wish.

Each afterlife plane is populated with, in addition to patrons, planars of that plane, at least 1 god/goddess and divine avatars of that god/goddess.

Special Note: Divine casters go to the afterlife plane where their god/goddess lives.

The afterlife plane for those who seek battle and war; the Battlefield contains endless battle. The Battlefield is divided into three areas; the field of honor, the feast hall and the armory.

The field of honor is a battlefield on which anyone can fight for honor and glory.

The feast hall contains an endless amount of food and drink. If a patron dies anywhere on the plane, they respawn in the feast hall.

The afterlife plane for those who seek knowledge; the Library contains an endlessly sprawling maze of bookshelves. Contained on these shelves are several copies of almost every book ever written. However, these books are not arranged in any pattern, scattered at random.

Scattered around the library are reading rooms. These rooms contain chairs to read in. In addition, each reading room contains endless food, drink, ink, quills and blank books. If a patron dies anywhere on the plane, they respawn in the last reading room they were in.

Outside the actual fortress which give the plane its name, there is the Den; the Den is a place for patrons to rest and eat/drink between trips into the fortress. Within the Den, there is an endless amount of food, drink, thieving equipment and daggers. If a non-patron tries to take equipment/daggers from the den, the item vanishes. If a patron who has taken equipment from the armory dies, the items taken vanish. The Den also contains a vault for each patron to store their loot. If a patron dies anywhere on the plane, they respawn in the den.

The afterlife plane for... those who "chose" it. Endless caves of fire, lava and stone. There are two types of patrons in the Pit; masters and clients. Clients are those who sold their soul for power in life; they are tortured here for all eternity. Masters are those divine casters whose god resides in the Pit; they can do anything they like and help torture the clients. Located in the Pit, masters can find bars with endless amounts of food and drink. If a patron dies anywhere on the plane, they respawn right where they died in 1d4 minutes.

NOTE: Clients can not be brought back from the dead without the direct intervention of a god/goddess. Masters have no such restriction.

The afterlife plane for those who don't fit into any other afterlife plane; the Inn is an endlessly large inn. The front room of the inn contains an endless amount of food and drink, along with endless fireplaces to sit by. In addition, there are the Halls, which contain an endless number of rooms to sleep in. If a patron dies anywhere on the plane, they respawn in the front room of the inn.


The major gods/goddesses of Mytheye are as follows:

This is not a complete list. There are a wide range of minor gods and goddesses.